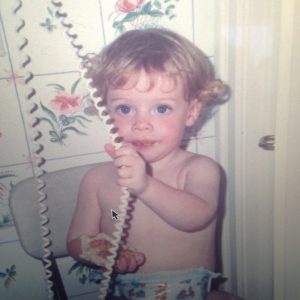 About one and a half years old

Jamie died at our home in Bethesda from an overdose of fentanyl. He was 27. As his younger brother Stephen said about him, he lived more in those 27 years than most people do in a lifetime.

He was born in Cambridge, MA, and, despite moving to Maryland before he was three years old, would often tell people as he grew older that he was from Massachusetts. He continued to be a huge Boston Celtics fan and also knew more about the NBA and arcane subjects like the salary cap than anyone we know.

From his very earliest age, he was wildly enthusiastic about many things, which often included food. As a one year old, he would yell, not cry, on planes, to the horror of his parents; maybe because his lungs allowed him to make noise, but more likely because he wanted out of his seat. As a two year old, he would run for the street, just because he could.

After moving to Maryland, he started attending pre-school in Bethesda at Our Lady of Lourdes. He made several fast friends there, as he would throughout his life. The teachers dubbed this group of friends, the “Mafia,” given their penchant for mischief. On parent visitation day, Jamie, in an unintended “stage whisper,” asked “Mom, is that a man or a lady?” in reference to a female teacher with a husky voice. 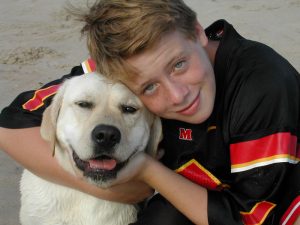 He attended elementary school at Burning Tree Elementary, where he would make several lifelong friends. He started playing sports in Kindergarten, first B-CC baseball and then MSI soccer. He was quite talented at both, but most noticeably, he always had a smile on his face, and, at that age, was much more interested in making friends than winning the game.

Jamie was always quite the talker. Once, when Rick’s sister Ginny was babysitting, Jamie came home from elementary school and just would not stop talking. Ginny asked if he could stop just for a few minutes. He said, “But Ginny, you don’t understand, I have to be so good at school.” Debbie’s idea was to have him run several laps around the house to let him use some of his energy after school. 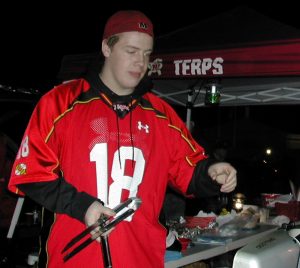 Grilling at our tailgate – age 17

When Jamie was about 11, we got our first family dog, a gorgeous yellow Lab named Lexi. Jamie and Lexi would spend a lot of time together over the next several years, to the point that Jamie would say that Lexi was “his” dog. They often took walks to Booze Creek, which he accessed through a neighbor’s yard and where Lexi would swim.

We also started taking family trips to the Outer Banks of North Carolina around this time, circa 2000. We had many great weeks in the quiet town of Duck, enjoying the waves, the ocean views from our deck and most of all, time with family and friends. Jamie cooked most of our meals in the latter years at Duck, even planning the meals days ahead of time. As we were finishing up one meal, he would be starting the following day’s feast in the slow cooker. It was a labor of love for him. He did tend to buy too much food and use every pot and pan in the house, which sometimes caused his parents heartburn, but we still enjoyed every minute of it. 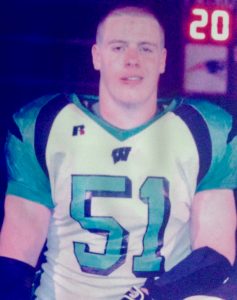 As a fan of Maryland sports, our family high point was in the early 2000s, as new football coach Ralph Friedgen won the ACC in his first year, along with a trip for Jamie and Rick to the Orange Bowl. And, in 2002, Hall of Fame coach Gary Williams led Terps basketball to the National Championship, which was oh, so sweet, indeed!

For Jamie, high school was primarily about competing in sports and being part of a team, specifically football, and secondarily wrestling. Gone was the happy-go-lucky attitude of his youth and it was replaced by a hyper competitive nature. He was named to the Gazette All-County team as an offensive lineman in his senior year, and while the team was good, it fell just short of the playoffs. Whenever they lost, Jamie would come straight home. Morgan and her friends would vacate the kitchen as soon as he appeared as he was never in a joking mood after a loss. Similarly, not even the acceptance letter to his beloved University of Maryland would lift his spirits after a crucial loss at a wrestling meet in senior year.

In his freshman year at Maryland, he joined Phi Gamma Delta, or Fiji, where he made several very good friends and enjoyed himself greatly, possibly too much. He and several Fiji brothers were bartenders at the legendary bar, The Thirsty Turtle, where they started Friday Day Bar, which meant that Friday night started at about noon at the Turtle. He also competed on Fiji intramural teams in both football and basketball and won several campus championships in those sports, which he would often boast about. 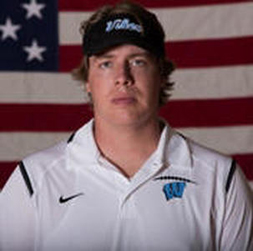 Ready for a night at Shenanigans, bartending

He graduated from Maryland in 2012 with a degree in history. During his senior year at Maryland, he started coaching the varsity lineman at Walt Whitman, which he would do for six years. His first season of coaching included Stephen’s senior season and, along with Rick keeping the stats from the sideline, made that a very special season indeed. Stephen likes to tell the story about Jamie tackling him in celebration after Stephen came off the field following his first touchdown catch.

Jamie very much liked working with kids, and had a tentative plan to make a career of teaching and coaching. In the last year of his life he was teaching at a public school in Rockville for special needs students. He loved that work and was good at it, being put on the operations team after only two weeks, which included only the highest performers. He also bartended at Shenanigans in Adams Morgan for several years, where a good night might mean $500 in tips. During some of these years he had very long hair, per the pic to the right.

He lived in a group house immediately after college in Wheaton where he and his roommates would often have Sunday Funday, where Jamie would cook and blast music, wearing a basketball jersey and goofy shorts and, of course, barefoot too. He greatly enjoyed his time at “Conover.” 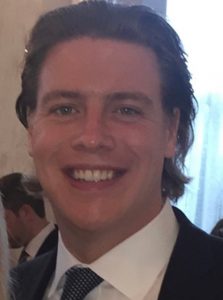 From there he moved to College Park, with his girlfriend Lauren, where they lived together for almost three years, in what were mostly very happy times for him. Jamie, Lauren and his husky/wolf, Jak, loved to hike the Billy Goat Trail. A bench in his name now sits on the C&O Canal Towpath near the entrance to the trail. Rick’s favorite hike ever was with Jamie, summiting Mount Elbert in Colorado, the second highest peak in the lower 48 States, per the pic below.

Over the last several years of his life, Jamie suffered from mental health challenges. He would have manic episodes, which included talking almost non-stop for extended periods, often detailing plans he had to open a restaurant or a bar that served “good” bar food. He embraced these challenges, often saying that he wanted to be an advocate for people with similar issues. These issues led to some unhealthy habits, including heroin use. We strongly suspected he was using but he would never admit it. If only we could have convinced him to go for rehabilitation. If only…

Thanksgiving and Christmas are going to be difficult for us. Not only because we will be missing Jamie but also because our memories of previous holidays are full of him cooking all day and making a holiday to remember for all of us.

We love you and miss you Jamie. 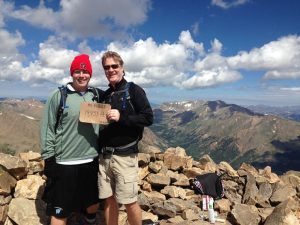 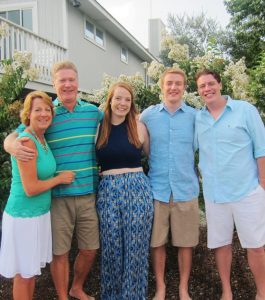